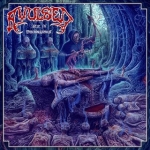 The reason why I never became a follower of AVULSED from Spain was simply the money. At the time the band started their career and I began listening to Death Metal, the early 1990s, I was still going to school and simply did not have enough money to buy all the stuff I want to. Nowadays I have enough money, but due to the huge amount of bands (becoming more and more over the years) releasing excellent albums I never got the opportunity to catch up on AVULSED. The band was founded by Dave Rotten, who also is running Xtreem Music. This MCD features four songs plus a cover version of BLACK SABBATH’s ‘Neon Knights’ and presents some kind of culmination of the year 2015. The guitar sound of Scandinavian Death Metal combined with the technical approach of American Death Metal joining milling mid-tempo British Death Metal plus the deep growling vocals by Dave Rotten add up to four excellent songs. No further words needed. www.facebook.com/pages/avulsed-official/103974539679454, www.xtreemmusic.com