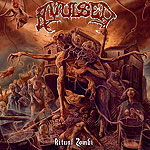 A band which keeps the very same logo from their early recordings, which dates back to 1992… I have those demos somewhere sent to me by Dave Rotten himself, who was more or less known for his label activities and I considered the band as a hobby, which was not that bad, but yet not that good. 21 years later that hobby is still going strong, but since a few couple of albums back, my opinion on the band is way more different than that of the demo days. Not only they have been working hard to have a sound of their own, but many have done the enormous mistake of taking this band as another brutal Death Metal band in the CANNIBAL CORPSE style. BIG MISTAKE for once and I do not care what, they are way more interesting than anything CANNIBAL CORPSE has released in the past years. The style of AVULSED, hear me now, is more in the DEMIGOD, BOLT THROWER, early DEATH and early AUTOPSY sound. They do use a lot of melody but in a dark and morbid way. Yes, they are still obsessed dealing with gore death and horror, but then again that is just the lyrical concept, which in this release goes more for a zombie approach. Yes, Dave’s vocals are still deep, low-growls which could use a bit more of variety, but then again that which is dead, shall remain dead. The production values are also great, especially the guitar sound which reminds me of that album with the cover art where some cadaver-like creatures are making a toast for blood and yelling for it. And if you have read the album title, yes it is a reference to that album. Dave surely has it in his cave on an altar with skull and bones with black candles lightening, the black vinyl version of where a young Charles, Chris and the not-playing-on-the album but still listed John, were featured… until the flesh decays. I will not tell you what cover song is included as it is just too damn obvious. After all these years, the formula of creating some of the best pure Death Metal has not changed. AVULSED again has proven so. This undead oracle of pain with 13 rotten hymns which will surely reawake the dead in hunger of the living. www.avulsed.com, www.facebook.com/pages/avulsed-official/103974539679454, www.xtreemmusic.com