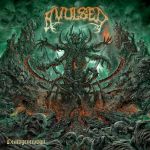 My first encounter with the mighty AVULSED was back in 1999 with the compilation “Seven Years Of Decay” that was released by a label in Colombia called Quirofano Productions. By the time it was easier for me here in Mexico to get a hold of productions released by Central or South American labels rather than wait 3 – 4 months for US or EU editions. This compilation included some early recordings from the band plus actual album cuts which was a nice overview of the band at the time, and I was hooked so bad with AVULSED that I ended up buying their studio albums up to “Stabwound Orgasm” and listened to them non-stop for one month every single day. In 2016 the band celebrated their 25 years of existence and since they have been an acclaimed act in the international underground Death Metal scene, and some of their early classics are still fresh to this day, they came up with the great idea of doing something unique and original. Why not pickup those classic tracks and re-record them with the current line-up (the band has gone through lots of drummer changes but the core of the band which is Dave, Juancar, Jose and Tana has been steady since early 90s). And so the idea of “Deathgeneration” came to life piece by piece, re-recording those early songs with a new and fresh production but the band wanted to add something extra on top of recreating their hits. They raised a fundraising campaign and lots of fans supported their idea of including some of the pioneers and current best vocalists in extreme Metal for guest appearances in each song. So you have people like (it gives me a big smile just to write this sentence): John McEntee, Chris Reiftert, Kam Lee, Antti Boman, Tomas Lindberg, Will Rahmer, Sven De Calowe, Anton Reisenegger and more (if you don’t know any of the names you should stop listening to Metal now and consider yourself done, or go check them out because all of them made an impact in the Metal world and still do). So what makes “Deathgeneration” a special release that deserves attention apart from the incredible roster involved? The answer is simple. AVULSED plays and delivers great Death Metal since the early 90s and are still strong and relevant in the underground scene because of their passion for Death Metal. AVULSED always kept it true to their sound, never changed and I don’t think they ever will. Those early / mid era tracks deserve to be revisited and enjoyed, and with the help of this all-star line-up it can be considered a collector’s item and a true gem for old and new Death Metal worshipers alike. On disc 2 of this compilation album you get a selection of tracks from the original AVULSED recordings (demos, EPs and albums), so please, buy this release. You won’t regret it. It’s a quintessential release not only for Death Metal freaks but also for people that enjoy and want to know more about the origins and history of early Death Metal. You can order a copy and check out news at www.facebook.com/pages/avulsed-official/103974539679454, www.xtreemmusic.com