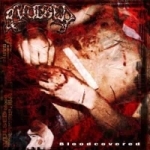 I’m not quite sure if this is really for sale or not as I just got a CD-R copy of it (with full colored packing though) and the whole release is strictly limited to 500 copies only. But I will give it a little mention anyway. All of the five featured songs are cover tunes, that already appeared on a bunch of different tribute albums (or probably will so soon), except for a live recording of SEPULTURA’s ‘Inner Self’. Haven’t really followed the career of AVULSED over the last couple of years, but compared to the stuff that I still recall from their earlier days, this sounds much improved (especially vocal wise). The tracks they mutilated on here are in particular: ‘Immortal Rites’ (from MORBID ANGEL’s alltime classic "Altars Of Madness"), ‘Embryonic Necropsy And Devourment’ (CARCASS, from "Symphonies Of Sickness"), ‘Edible Autopsy’ (from the CANNIBAL CORPSE debut "Eaten Back To Life"), ‘Magic Dragon’ (SODOM, originally to be found on "Agent Orange") and the already aforementioned SEPULTURA ("Beneath The Remains") classic. The more extreme the original was, the better AVULSED’s version has turned out. So, if you’re into brutal Death Metal or just enjoy covertunes, make sure to contact AVULSED for further info on this at: avulsed@repulserecords.com.