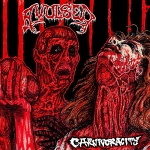 Re-releases always remember me, how quickly time goes by. Twenty years after its original release on mighty Malodorous Mangled Innards Records, mastermind and vocalist Dave Rotten now re-releases this little treasure on his own lable Xtreem Music. No need to introduce AVULSED at this location at all and to speak about their leading role in the Spanish scene. Originally released as a seven inch EP, this reissue comes up carefully remastered, with overworked artwork and nine live bonus tracks. It has been years now since my last listen to this EP, so this reissue sounds fresh and unused again to me. The opening track ‘Carnivoracity’ is a real underground old school Death Metal jewel and of course, their further releases were a lot better and their musical skills have improved over the years, but for me this is still the magic sound I fell in love with. Brutal sounding Death Metal with the love for gore and shocking topics. The deep and harsh grunts of Dave Rotten are fitting perfect to their dark and grind influenced sound. Also to write an eight minutes lasting song was not common in this genre, apart from the Gothic Doom bands. The middle part shows up some Doom Metal influences as well and makes this track really remarkable. The second track ‘Cradle Of Bones’ is another Death Metal monster, brutal and fast and influenced by the early Scandinavian Death Metal, with the deepest possible grunts. The third track ‘Demonic Possession’ is a cover of Chilenian masters PENTAGRAM, sounding like a speeded up version of DEATH or POSSESSED. The remaining nine tracks including outro are all raw live recordings with two cover tunes of DEMIGOD and BRUJERÍA. The live speed is higher than on the studio recordings and for fans of live recordings only. What is captured well is the underground mood of old concerts. Nice to have but also a re-release as a seven inch with three tracks only would have been enough for die hard fans or for fans of early 90s Death Metal. Both formats are available anyway and more info can be found at these locations: www.facebook.com/pages/avulsed-official/103974539679454, www.xtreemmusic.com