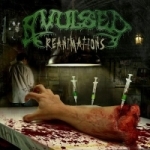 This is not the new album from the pack lead by mister Rotten following “Goresplattered Suicide” as I initially thought, in fact this an enhanced MCD with a slightly “strange” concept – strange as in “unusual” which seems to appeal to AVULSED from time to time if one remembers their remix CD “Cybergore” some years ago (if somebody wants to get rid of that one – contact me, hehe). Now, “Reanimations” is not again a technoid remix CD (apart from the last song). The first three songs on here are AVULSED’s own compositions with their trademark brand of heavy Death Metal with influences from the classic Finnish sound from the early 90s. ‘River Runs Red’ (not a LIFE OF AGONY cover) and ‘Foetal Consolation’ are the only new songs on here whereas ‘Unconcious Pleasure’ is a re-recorded track from their first demo, blending in quite well with the new tracks. Following are AVULSED’s takes on classics from EXODUS (‘Piranha’), W.A.S.P. (‘I Wanna Be Somebody’) and GOREFEST (‘Mental Misery’), the latter being the most convincing as it is stylistically not too far away from the band’s original sound. There also seems to be a video clip for ‘Let Me Taste Your Flesh’ made up from gig footage, unfortunately this one is not included on the promo CD. And now to the strange part: to fill the remaining space AVULSED let nine bands cover their own material. The results are quite mixed as every bands follows a different style – not all bands are Death Metal, some play a modern kind of groovy Thrash, sometimes even semi-clear / melodically shouted or even female voices are used. The last song is a remix of ‘Stabwound Orgasm’ going in a jungle / breakbeat direction (some synthie parts sound quite like Trance, though). I am glad the band dropped the original idea of recording a disc full with covers of classics as I am not too fond of that anyway but turned up with this rather unusual idea. Not every version may be great but at least this is quite interesting. On top of it you get a cool cover and if I am not mistaken there is also a limited edition with a syringe filled with ominous green liquid available at shows or from the band directly… maybe a collectors release after all! For more information head here: www.avulsed.com