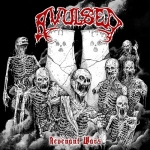 One of the household names in Death Metal is the blood drenching Spaniards from AVULSED, Dave Rotten and company have been haunting the Death Metal scene since 1991, conquering countries and Metalheads all over the world, one by one with strong and relentless attacks of gore and horror. I became partly hooked when "Carnivorocity" (the CD version) sounded at my ears with the force of a sledgehammer, and I have been following the band ever since. Earlier this year the smashing "Ritual Zombi" saw the light of day, a good album that also became quite well received. Besides the album tracks AVULSED also recorded a track entitled ‘Revenant Wars’, which now has been released on a 7" together with an even newer recording, the evil and powerful version of NIHILIST’s ‘Sentenced To Death’, a classic the band used to play when they shared the stage with ENTOMBED. ‘Revenant Wars’ is classic AVULSED, a brutal and catchy start and then a Death / Grind attack of another dimension that leaves you breathless and beaten when the last stroke dies out. Besides the mass brutality we get a good deal of great guitars and a nice hooking rhythm pattern running below the carnage. A nice strong AVULSED effort that doesn’t take prisoners and makes you growl along. The NIHILIST worship is done well, brutal and dark as the original and a tad more intense and straight in your face, Dave has a grim and menacing growl, which really fits the dark and murky Death Metal that NIHILIST performed really well, a well performed and deserved homage to the Swedish gods. This release has during the last couple of weeks grown to become one of my favorite releases this year. Two killer tracks delivered intense with a lot of soul and passion, and some styleful packaging. White vinyl, some fitting artwork from Mark Riddick and a lengthy interview with Dave Rotten done by Walther A. Kohl, the man behind Unholy Prophecies, and the interview is only an excerpt from the full interview which will be brought in Metal-Daze, in Spanish unfortunately, as I don’t read that so well. This release is a sure hit for Death Metal fans, two tracks that will keep you warm during the coming winter! Enter the crypt: www.avulsed.com, www.facebook.com/pages/avulsed-official/103974539679454, www.unholyprophecies.com