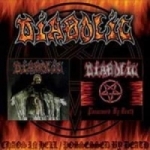 I was actually quite surprised when I received this release as I didn’t know that Florida’s DIABOLIC were still around… Somehow I must have lost track with them after the release of their last full length album "Infinity Through Purification", that already dates back to 2003… Well ok, the original band did split-up in September 2004, but went on as UNHOLY GHOST at the time. Ÿ of the current DIABOLIC line-up already played on UNHOLY GHOST’s one and only full length "Torrential Reign" (Aantar Lee Coates – drums, Paul Ouellette – bass/vocals and Kelly McLauchlin – lead guitars), while guitarist Jerry Mortellaro was replaced by RJ Reinagle now. The fact that these guys are using the DIABOLIC monicker again since 2006 probably indicates that Brian Malone’s incarnation of DIABOLIC is no longer around (they had recorded the "Infinity Through Purification" album). Anyway, ever since their new start the band released two very impressive self-financed EPs ("Possessed By Death" in 2006 and "Chaos In Hell" in 2007), that Deathgasm Records has re-issued now on one single CD. The whole material was perfectly produced by Juan "Punchy" Gonzales (MORBID ANGEL, TERRORIZER, UNHOLY GHOST) and should easily please every fan of heavy blasting, Satanic Florida Death Metal in the vein of classic MORBID ANGEL (songstructures and a lot of the guitarwork) with some strong DEICIDE overtones (for the rather possessed sounding vocal delivery first and foremost). Especially if you already liked the previous DIABOLIC releases (or the UNHOLY GHOST full length) you certainly won’t be disappointed by this one either. As a bonus you’re getting a promotional video for the track ‘Engulf The Enchantress’, that more or less shows the band at their rehearsal space… A new DIABOLIC full length might be released in the not too distant future, as well as a debut album by BLASTMASTERS (yet another name for the members of the UNHOLY GHOST / DIABOLIC line-up). For more info and / ordering details check out www.deathgasm.com