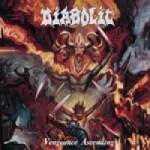 The camp of DIABOLIC is a confusing one, what happened to their “Subtarraneal Magnitude” album? There was this huge label bullshit and that album has not come out, well at least not on this side of the Atlantic. This just may be the bands forgotten album in their career never to be released, anyone who has a promo copy shall feel blessed it will become very rare. Much like NECROPHAGIA with their “Death Is Fun” lost album and also DARKTHRONE’S “Total Death” album that was recorded in 1992 I believe and not released until 1996. Anyways this album far surpasses any of their previous albums, and actually passes many Death Metal acts out there. Drummer Aantar “Blastmaster” is one fucking mad man, some of the best drumming I’ve heard in a long time in the genre. The music is fast, faster than anything before they’ve done. The production is sort of like HATE ETERNAL and KRISIUN, and those are also 2 good musical comparisons. Very fast, ripping, technical Death Metal with some slow groovy parts. DIABOLIC are by far way ahead of their peers such as CANNIBAL CORPSE, DEICIDE and MALEVOLENT CREATION, DIABOLIC is NWOFDM (New Wave Of Florida Death Metal). They are without a doubt one of the best acts out there that earns every penny they get.