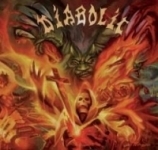 This is the fifth full-length by this blasphemous quartet already (when I don’t count their “Chaos In Hell / Possessed By Death” EP compilation). Especially this last one had my hopes for this one really high. Their floridan Death Metal took an even more extreme direction and on “Excisions Of Exorcisms” it’s a mix of POSSESSED and KRISIUN. It’s very agressive, very straight forward intense… and hardly anything else. UNHOLY GHOST’s “Torrential Reign” came to mind especially on ‘Evil In Disguise’. But where this formula worked very effective on the “Chaos In Hell / Possessed By Death” record, on this one their formula shows some cracks. It reminded me of MARDUK; they unleash an overwhelming storm of aggression, but it doesn’t really stick. Maybe it’s just too straight forward, with riffs that aren’t that strong this time and pretty much alike. But the main problem is that most tracks miss their magical talent of wicked songwriting, like they showed on “Infinity Through Purification”. A track like ‘Venomous Habitations’ loses tension because it falls into boredom. ‘Entombed’ starts pretty much the same like ‘Marked For Banishment’ from “Vengeance Ascending” with very cool collaboration of drums and guitars but darker and less variating. However, on ‘Hellish World’, ‘Evil In Disguise’ and especially ‘Bloodwashed’ they hit the spot and turn them into supreme explosions of power and intensity. The significant slower ‘False Belief’ doesn’t show their talent either. So in the end, this one left me with mixed feelings. The production supports this wild and old school atmosphere which is a big plus (actually it was best to play this through speakers than through headphones… weird because it normally works the opposite way!). Despite this slightly negative tone it’s NOT a bad record!! Only not as crushing as what these guys showed us in the past. In any case, support this band, no matter what! Order this one, but make sure to check www.myspace.com/diabolic666 or www.deathgasm.com first.