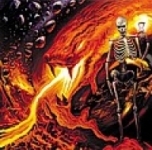 Before this sophomore effort, DIABOLIC was already a leading force in the Death Metal movement, thanks to fantastic demo and a no less convincing first album. But now, this four piece from Florida could easily claim the crown of the kings of death, as “Subterraneal Magnitude” is a true masterpiece! The band surpassed themselves to offer us ten tracks of demonic music, the strongest point of this album lying in the fact that a feeling of uneasiness difficult to define radiates out of it. One has to refer back to classics like “Hell Awaits”, “Don’t Break The Oath”, “The Return” or “Seven Churches” for example to find the same special haunting effect which made the art of the originators of Death Metal so appealing. DIABOLIC didn’t invent something new, that is for sure, but rather refined a well-known formula to the point of perfection. The album instrumental intro ‘Vassago / Forewarning’ sets the frightening atmosphere for good, and what follows is nothing less than a cyclone of unrelenting blast beats, slow grinding parts, the whole dominated by the possessed vocals courtesy of Paul Ouellette. Personally, I don’t think the production does justice to the musical talent of this foursome, as the sound is somewhat blurred, especially the drums. But I am reviewing here a way in advance promo CD, and maybe the definitive version would show some improvement. The highly talented Joe Petagno is again responsible for the cover artwork, maybe it is a too obvious choice these days, but who cares as the result is splendid! The Blastmasters are back with a vengeance with this, let’s just hope that they will cope with their line-up problems for good, as the recording line-up is no longer valid, guitarist Brian Hipp being replaced by Jerry Motellaro now. Anyway, an essential buy!