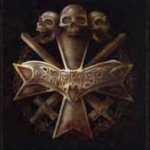 Releasing a self-titled album often indicates a new beginning in the career of an already established act. In the case of Sweden’s DISMEMBER it’s in fact the first album without drummer / founding member Fred Estby. But with all respect to his contribution to DISMEMBER in almost 20 years, I can’t really see the need to join the shit talking about the band now that he’s gone (what many Death Metal fans already did when that news got out). C’mon – DISMEMBER is still going very strong these days, several other line-up changes took place during their existence and vocalist Matti Kärki and guitarist David Blomqvist have been in the line-up almost as long as Fred used to be, so what the fuck? Due to the fact that I only own a promo version of the new album, I’m not exactly sure who played the drums on this record, but at least for their upcoming live shows DISMEMBER managed to recruite Thomas Daun, who should be wellknown from his impressive work with INSISION and REPUGNANT already. So, don’t worry: “Dismember” does not come up with any drastic musical changes or experimental ventures, it’s simply “just another typical DISMEMBER album”. And by writing this, I definitely don’t mean that it’s a boring or weak record! Not at all! If you loved the band’s previous releases, you’re most certainly gonna love this one as well as it offers eleven new tracks, that are still rooted in the Sunlight era SweDeath, but spiced up with the raw ugliness of AUTOPSY and melodic aspects of classic IRON MAIDEN. While the AUTOPSY influence shines through in almost all of the tracks (in the slower ones in particular) you get to hear the band’s MAIDEN worshipping very clearly in the ending part of ‘Under A Bloodred Sky’. Those twin-guitars could easily have been released on “Iron Maiden” or “Killers” as well! Apart from that the band still knows how to write a solid mixture of fast and slow Death Metal tunes that compliment each other very well. So, don’t let yourself fool by all the stupid internet gossip – no true DISMEMBER fan will be disappointed by this record, that’s for sure! You still get what you expect from these guys – and that’s more than fine with me! www.dismember.se, www.regainrecords.com