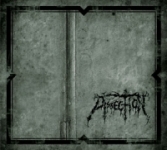 A band that suffered a too silent and too premature death is without any doubt DISSECTION (formerly NECROPSY) from Lithuania. Don’t let this one pass you by for the simple fact this isn’t the Swedish namesake! You’ll miss something great like, let’s say an European equivalent to GORGUTS. The re-release of this two demos showcast a level in technique, songwriting and catchiness that makes me grief for the demise of this act, which – as far as I know – happened because members went to other bands like OSSUARY, GHOSTORM and CONSCIOUS ROT. My hails go out to Ledo Takas Records for this compilation! The first part features the second demo “Pyramid Of Hate” from 1993. In 6 tracks plus a weird intro they perform a form of Death Metal that was quite popular in the USA and the Netherlands more than a decade ago; brutal, solid and technical without any overkill or too melodic. Played tight, convicing with great guitarsolos and a some cool catchy riffs. If you ask me these guys were ready for their first album on this one. Check the great ‘Born To Die’, with a cool IMMOLATION riff! The second part of this CD features their less technical first demo “Suffocating Syndrom” which is a bit darker and more straight forward. The tracks ‘Abolition’, ‘Inferi’ and ‘Suffocation Syndrom’ are cool songs and reminded me a bit of CONSCIOUS ROT (anybody knows their great “The Soil” demo?) and AUTOPSY for the vocals. DISSECTION was close to sign a deal with Cenotaph Records that released some great EPs for ROTTREVORE, GOREFEST, HUMAN REMAINS and UTUMNO so convinced now? To cut it short: DISSECTION didn’t set new standards (or didn’t get the chance to) but still was a great band in their short live and deserves to be honoured with this release! Don’t know any price but make sure to contact www.myspace.com/ledotakasrecords or www.ledotakas.net for your copy or www.ferrum.lt for more info on the band.