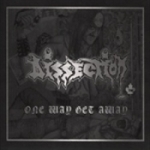 This is a little off topic way to start the review, but I need to get it off my chest: I hate when bands use the same name as other bands! Besides this little pet peeve, I was very impressed with "One Way Get Away" which was my first exposure to the Canadian Thrashers. This is a deluxe digibook double CD, career spanning retrospective of the Canadian’s studio release and demos. Disk 1 has the bands 2 studio albums "Final Genocide" (1987) and "Garden Of Stone" (1992) while disk 2 contains the bands demo releases "Chainsaw Slaughter" (1986), "Black List" (1986) and the unreleased "Be Exploited Or Be Exterminated" (1987), all still recorded under their previous moniker GENOCIDE. The release is limited to 500 copies making it very appealing to all you collectors out there! The first thing that I noticed was how close the guys stay to the classic Bay Area sound, especially to ‘Kill ‘Em All’ era METALLICA. While making my way through the 40 tracks on the two CDs I could have sworn I was listening to METALLICA’s debut at times! DISSECTED also appear to be quite heavily introduced by other classic thrash acts as KREATOR and VOIVOD. I listened to the 2 CDs in one sitting so it was really cool to see how the band refined their sound from their early demos to their studio releases. While their sound doesn’t drastically change throughout the tracks, they do appear to become more confident in their abilities and their chops noticeably improve throughout. However, over the 40 tracks, you do start to get a little disinterested as the majority of the songs seem to come from the same mold. While you may say this is true of any Thrash band, other bands such as SLAYER, who have followed the same format for 20 + years just do it in a way that never disappoints. That’s not to say that I didn’t enjoy reviewing "One Way Get Away". I’m a huge Thrash fan and was very impressed with some of the riffs thrown out by guitarist Antisocial Zap (great name!) on songs such as in ‘Deceiving Creatures’, ‘Morbid Meat’ and ‘New World’. Before I forget, I would also like to say I loved the cover art of the clown laughing hysterically while brandishing a bloody chainsaw… very nice lads! While I did enjoy the majority of this release, I feel that this release would have been better off as a single CD "best of", where the band could have shown off their 10/15 best tracks and given fans a great send off. 40 tracks is just too much and left this listener numbed to the material by the half way point. www.myspace.com/dissectiontm, www.areadeath.net