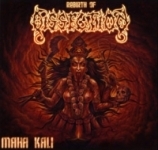 Featuring a controversial act like DISSECTION will certainly cause a lot of negative response from several people visiting our website, so let me explain this decision in a few words… I am not here to ignore or glorify the crime that Jon Nödtveidt committed (and which he got arrested for), nor do I consider it as something to be proud of! Killing other human beings is one of the most disgusting things that mankind is known for, so don’t tell me that this is a sign of strength or other bullshit! To me it’s actually a sign of weakness not being able to find a more clever solution to solve a problem. And comparing mankind to animals by using the saying ‘survival of the fittest’ is another lame excuse! Animals kill to survive, while mankind mainly kills for greedy aspects… But enough of that now – I suppose you got my point. So why are we still featuring DISSECTION then and on the other hand ignore bands that are also known for their rather braindead statements / actions? Well, in most cases those other bands were using controversity mainly to deflect from their lack of musical talent, while DISSECTION was musically always a very strong force that inspired many acts to follow… Which leads us to this new EP here after all. Except for Jon Nödtveidt, there’s no other old member of the band involved in "the rebirth of DISSECTION" (to quote the CD cover’s "headline"). The new line-up comprises of a bunch of quite experienced musicians though: Set Teitan (guitar, ex-ABORYM), Thomas Asklund (drums, DARK FUNERAL, INFERNAL) and Brice Leclercq (bass, NIGHTRAGE) – and you really hear that! DISSECTION probably never sounded tighter than on the two tracks on this EP. But except for Jon’s still very impressive vocal delivery the title track ‘Maha Kali’ unfortunately completely lacks in the old DISSECTION trademarks, which made the band so popular in the past. After a rather technical opening section ‘Maha Kali’ quickly turns into a midpaced and kinda groovy Heavy Metal (!!) tune, which comes across surprisingly melodic, due to very dominant twin-guitar harmonies and only recalls old DISSECTION due to the harsh vocals. The band’s dark atmosphere is completely gone here and the additional female vocals (no joke!) really suck big time! Disappointing! Track number two is a re-recording of ‘Unhallowed’, which is way better, but by no means reaches the quality of the original! Don’t get me wrong – if this material would’ve been released by a different band I might’ve been impressed a bit more maybe. But as long as it’s getting released as DISSECTION I simply expect a lot more than just this. Two tracks are of course not enough to really judge about the future of the band (especially not if only one of them is really new), so we will simply have to wait for the next full length, which they will start writing material for after the tour is over. Label contact: www.escapi.com