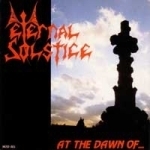 So apparently all 500 CD copies that were originally pressed by Belgian Midian Records back in 1992 are gone and some of them made their way into eBay and selling for top dollar. Well, I haven’t looked there, but I believe there’s a demand for this long sold out split album, especially that ETERNAL SOLSTICE are back from the dead again, which I’m really stoked on about, as in my humble opinion it is one of the best Dutch Death Metal bands, especially their album "Horrible Within" is a fuckin genre classic! As for the split album in question, it presents both bands at their rawest, this was recorded back in 1990 and released two years later. I imagine if it was released and properly distributed without a two year delay, both bands could have made a much bigger splash in the international scene. Now as it stands, it became sort of a cult release and Vic Records stepped in and re-released it for a wider audience. No remastering was done here, it sounds just like it was originally recorded, so it adds some historical charm to it. ETERNAL SOLSTICE start the proceedings with mid-tempo Death Metal with a freezing touch of Doom here and there, heavily influenced by MASSACRE, early DEATH, POSSESSED and SODOM, they rip the listener apart with 4 tracks of rough and chilling Death Metal as it was played back in 1990. Really good stuff, the mix isn’t perfect, those double kicks take a LOT of low space, but with the help of EQ you can manage to fix it up. MOURNING offer five tracks in a similar vein, there is abundance of riffs and tempo changes with some quirky saxophone bits (maybe that’s where PAN-THY-MONIUM got their idea??) which at the time must have sounded very out there and weird. I think they already were trying to expand the boundaries of Death Metal which was blooming underground phenomenon at the time. Personally I like the ETERNAL SOLSTICE side a bit more, but MOURNING aren’t far behind and their song ‘The Mourning After’ is probably my favourite on the split, it got some imaginative songwriting, younger bands should take notice how to keep your Death Metal interesting! I put my stamp of approval here, so you should check it out too! Killer! For all further info go to www.facebook.com/pages/eternal-solstice/384594534885754, www.facebook.com/pages/mourning/480200688659807, www.vicrecords.com