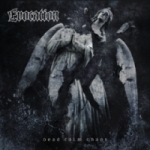 The expectations had been more than just high and honestly speaking demanded the whole Death Metal scene nothing less than a further masterpiece from not one but the Swedish Death Metal hope EVOCATION. And yes they conquered again so easily the Death Metal throne that I’m more than just surprised. Since their debut “Tales From The Tomb” there had been a lot of great releases but still is EVOCATION’s second strike a step ahead and without doubt the Death Metal release of the year. The album starts with the atmospheric guitar intro ‘In The Reign Of Chaos’ and it’s the last fading ray of light before the song ‘Silence Sleep’ is taking no victims, a traditional old school Death Metal song and even if we are talking about the first song of “Dead Calm Chaos” all main trademarks can be found. First of all the crystal clear sound, secondly the pure aggression mixed with the so essential solos and the most important fact the traditional 90s feeling transferred into 2008. The next song ‘Angel of Torment’ is supported by AT THE GATES madman Anders Björler and sound wise more in direction of old SACRILEGE and definitely a song for the coming live set. Could write in detail about every song for example the title track which is an incarnation of the world DEATH Metal and an example for all this NU Metal bands how easily you could combine melody with the purest form of aggression (I can nearly feel the pain in my neck when I listen to this song). Next to Mr. AT THE GATES the band also invited Dan Swanö (BLOODBATH / EDGE OF SANITY) for a small contribution to ‘Dead Calm Chaos’ and ‘Antidote’ is offering one of his great solos. So what is left to say after 12 songs maybe that there are only a few days to go before the hungry crowd can get their hands on this masterpiece and that there are a lot of good releases but only some which are worth to be called essential – and “Dead Calm Chaos” is definitely such a release. www.cyclone-empire.com, www.evocation.se