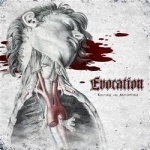 I’m not totally sure I understand this release. I dig the idea of bands releasing an homage to their heroes and what inspired them starting their band and influenced their music. Though only two of the tracks on this EP could have inspired EVOCATION, as one track is contemporary for the band’s formative years, and the two others from after the band was started, and ‘You Suffer’ from one of my all time favorite bands NAPALM DEATH, I never thought about that exact track nor style as an inspirational source for EVOCATION, while listening to their music. Though again, EVOCATION was formed, made two demos in the early nineties, before the band was laid to rest, before being resurrected in the mid-nineties, making both BOLT THROWER’s "For Victory" album, AT THE GATES’ "Spiritual Terminal Disease" and EDGE OF SANITY’s "Unorthodox" inspirational sources. The latter bands yes, that is quite obvious, though I have, again, never thought of BOLT THROWER as a direct inspirational source of the Swedes. CARCASS on the other hand, can’t we blame them and their flair for melodic mayhem, for the rise of melodic Swedish (Gothenburg) Death Metal? This (vinyl only) release is a funny size, as it showcases five cover versions, and that is it, and that are versions quite close to the originals, so you don’t think, god damn, this is EVOCATION playing… but god damn, EVOCATION is paying homage to… and that they do quite well. But in a release-trigger-happy world as we are in right now, more interesting releases are to be found, even though it is interesting for the hardcore EVOCATION fan to know where the guys have found their inspiration, as I reckon the good old fashioned interview has gone out of style. I am quite divided when reviewing a release as this, as the intention is quite good, but the outcome and impact is quite indifferent. www.evocation.se, www.facebook.com/evocationswe, www.centurymedia.com