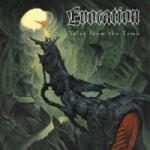 Every pure Death Metal fan will certainly agree that innovation within this style of music is not necessarily needed as long as a band plays their stuff with enough brutality and the right feel for it. Sweden’s EVOCATION, who used to release two amazing four-song demos back in 1992 (both were re-issued on CD/LP in 2004 via Breath Of Night Records) obviously took that to heart and returned to the scene after almost 15 years of silence with a surprisingly strong and very self-confident debut full length. Four fifths of the old line-up is back on board again and it seems that their temporarely work in CEMETARY, SUNDOWN and LAKE OF TEARS (luckily) hasn’t affected their original style at all. I mean, it’s no big secret that musicians who decide to quit playing extreme music at one point in their lives usually loose that particular fire along the way. Not so EVOCATION. It’s simply amazing what these guys have musically created after so many years. All of the songs (except for ‘Veils Were Blown’) are brandnew and even more convincing than the already excellent demo material. This is Swedish Death Metal in perfection: great musicianship, the typical down-tuned guitarsound, simplicity in the writing, mixed with a very brutal, yet clearly understandable voice and even a healthy dose of catchiness (guitar melodies, choruses etc.) and on top of it an awesome cover of ENTOMBED’s ‘But Life Goes On’. If someone would’ve played this record to me without letting me know who it is and when it was recorded, I definitely would have guessed of something from the early 90s. So, in case you lost your interest in ENTOMBED, DISMEMBER, GRAVE and all the other Swedish acts that established this so-called “Sunlight” sound way back, make sure to get yourself a copy of this one instead for it is a lot closer to classic NIHILIST / early ENTOMBED than anything else I’ve heard in years. A killer Dan Seagrave coverart and a very cool bandlogo complete the overall great impression. So, to me “Tales From The Tomb” is definitely the best Swedish Death Metal debut ever since “Left Hand Path” and I’m certainly not kidding here, folks! Release date: April 27, 2007. For all further info check out www.evocation.se or the label’s website www.cyclone-empire.com.