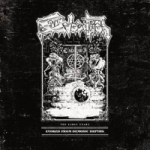 Holy Shit! I can’t believe that I have not heard of Sweden’s Death Metal masters EVOCATION until this review. These guys started out in 1992 with a few demos and started to get interest from labels until they decided to put the act on ice after musical differences popped its ugly head into the band. Luckily as the saying goes, "Time heals all wounds" and the band was resurrected to release a full length in 2007. What we have here today is a new release via Century Media Records that captures the essence of the early demos / material by the band. Ironic since Century Media back in the early to mid 90s was the go to label to release / distribute much of the Death / Black Metal and it is a damn good thing they did bring together these jams to showcase what EVOCATION brought to the table back in the heydays of Death Metal. On this compilation you get the "The Ancient Gate" demo, the "Promo 1992" demo, four unreleased rehearsal tracks, a newly recorded, unreleased track from 1992 (‘Genesis’), 3 video live tracks recorded in 1992 and a 32 pages booklet to keep your reading skills up to par (so, all in all this was done with a lot more class than the self-titled Breath Of Night / Merciless Records compilation from 2004 that already featured both EVOCATION demos as well – Frank). From the minute that you hear "The Ancient Gate" demo you can easily see that these guys are Swedish Death Metal à la ENTOMBED / DISMEMBER / GRAVE. The songs grasp you and just bash your head with ease into the pavement. There are moments of melodic Death Metal throughout the music and the guitars are what is really driving this band. Mesmerizing guitar solos and crunchy rhythm section that teleports you into the early 90s holding your Pepsi Clear soda and a CD Walkman player. The rehearsal tracks are some interesting pieces that are dropped down a few notches by the production. I would highly recommend you to check out this band. This disc should give you a fix for Swedish Death Metal now that DISMEMBER have broken up and until the next GRAVE album is released. Not only that but it is a great piece to add to the CD collection. Now my homework will have to lead me to check out their releases from 2007 – now. For more info: www.evocation.se, www.centurymedia.com