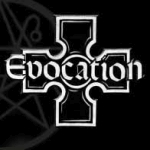 I never really understood why Sweden’s EVOCATION didn’t make it any bigger… After having released two excellent tapes in the early 90s (and an interview in one of our classic early print issues) I really expected them to follow-up with a killer full length shortly after. But that never became reality, unfortunately. Now, more than ten years later, the reason for this was finally revealed. Even though the guys indeed had some serious label offers back then, they couldn’t really agree on the musical direction within the band and therefore decided to put the whole thing on ice instead. I suppose that some of them wanted to become more melodic as members later popped up again in more established acts such as CEMETARY / SUNDOWN and LAKE OF TEARS, but I’m not totally sure about that. Anyway, at least some of the original EVOCATION lads had the very cool idea to offer their strong old material to some labels in order to re-release it and Breath Of Night Records was smart enough to do just that. Unlike many other re-releases of old demos, this one here really makes sense for a change, because the quality of the recordings (at least the first part of the disc, which is the three songs plus intro from their “The Ancient Gate” debut demo) can easily compete with many albums of the same time period! Recorded at the once very popular Sunlight Studio (with even more popular producer Thomas Skogsberg) EVOCATION delivered nothing but first class, very late-NIHILIST / early ENTOMBED influenced Swedish Death Metal. Yes, you get everything here, which we all used to like so much (and mostly still do): the crunchy low tuned, “typical Swedish” Death Metal guitar sound, the low grunted, but never ridiculous sounding vocals and a songwriting formular that hundreds (or maybe even thousands?) of bands at the time had adopted pretty quickly after NIHILIST had appeared on the scene. Unoriginal as fuck, but incredibly entertaining to listen to – even today! The other four songs on this CD originally got recorded at the end of 1992 at GMP Studios in Sweden and were released as the band’s “Promo Tape”. Soundwise not exactly as strong as the Sunlight material (yet ok sounding), but musically still along the same line. The main difference to their earlier songs is probably that they used to incorporate a lot more little bits and pieces into their writing, which results in a little more complex direction, without loosing the brutal Swedish Death Metal roots though. All in all this is still way better than all the “retro” stuff that is coming out these days (CHAOSBREED, BLOODBATH etc.), so you can easily go for it, if you still get a kick out of those kinda bands. Band contact: tjompetjubang@hotmail.com, marko_palmen@hotmail.com, for ordering info, check out www.merciless-records.de