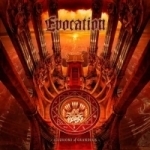 Here it comes, the Century Media debut of Swedish hard working EVOCATION. Facing the fact that “Illusions Of Grandeur” is already the fourth full length album within five years and with a closer look at the past touring and festival schedule of EVOCATION it’s more then obvious that “success” does certainly not come over night. EVOCATION sweated hard on this road and this new studio album is actually the obvious step of a band signing to a bigger label. It’s the first time EVOCATION worked with Roberto Laghi (IN FLAMES etc.) in terms of production and the sound itself is much more transparent, polished and simply made for a wider audience. Musically it’s also obvious the 2011 support tour for AMON AMARTH left a big mark, at least songs like ‘Divide And Conquer’ can’t hide similarities and Johan Hegg even ended up doing some backing vocals on ‘Into Submission’. Furthermore this album is filled with a massive AT THE GATES vibe, too. You’ll easily notice that just by checking the titletrack; but if you take a distant view after a few rounds on that material you’ll still notice the EVOCATION basics consisting of great vibe of melodic and melancholic feeling to it. Expect well arranged, in-depth, but still catchy tunes. In terms of lyrics and visual concept this album still forms a union to the rest of their discography. Just check the awesome coverartwork by artist Xaay; a real eye–catcher. Let me put it like this: “Illusions Of Grandeur” offers a much wider spectrum, although you have above mentioned references. The old school EVOCATION fans who prefer “The Anceint Gate” demo and the “Tales From The Tomb” debut album will have a harder time with that one, but I guess that already happened to them on the last two albums as well. To me “Illusions Of Grandeur” has some really good moments of songwriting and if you can accept it that the band now simply uses all the possibilities they have then you can get a more easier access to that release, otherwise simply stick to the old stuff from EVOCATION’s list of releases. By the way the limited digipak version comes with embossed cover and three studio bonus tracks. www.evocation.se, www.facebook.com/evocationswe, www.centurymedia.com