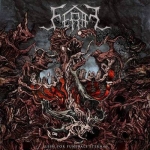 Sweden’s FERAL has returned with their third opus of Swedish Death Metal nicely titled “Flesh For Funerals Eternal”. The Swedes have been spewing out this kind of music since 2007 when they decided to restart the band. The quintet had a solid response from their 2011 debut album “Dragged To The Altar” and 2015’s “Where Dead Dreams Dwell”. If you are not familiar with this band you need to check them out. Getting the party started on this album is the song ‘Vaults Of Undead Horror’. A skull bashing and neck breaking of a jam that will quickly define how the rest of the album will go. The band has a strong influence / inspiration of mid 90s era GRAVE in their songwriting and sound. You hear it in several songs throughout the entire album and is a nice homage to a great band and fellow country mates of FERAL. ‘Gathering Their Bones’ is one that stands out. The song has a decent a mid-tempo speed range that quickly jumps around with some really good drum fills, breakdowns, and goes into all-out war about half way through. Definitely a stand out on this record. ‘Dormant Disease’ thrashes away next with blasting drums and razor-sharp guitars. A bit of groove is noticed on ‘Of Gods No Longer Invoked’. The band jumps around from a mid-paced groove to a fast paced one. There is a part of the song where the bass treble is picked up nicely and again reminds me of some GRAVE songs. A nice change of pace but overall delivers the message that FERAL can adjust their music settings and don’t just spew out the same song over and over. Other notable tracks that really caught my attention were ‘Accursed’, ‘Buried’, and ‘Stygian Void’. Excellent musicianship from these Swedes, they can adapt their sound but keep the same force. Overall if you have not heard of these guys and you are a fan of Swedish Death Metal then you need to start hitting up your local music store or webstore and pick up this album. You cannot go wrong here as the band really brings out the heaviness of the music. FERAL brings a really solid album here and I believe they have perfected their sound / style going into this third album that runs just a bit over the 40 minute mark. Seriously, check this out asap. More info at: www.facebook.com/feralswe, https://tometal.com