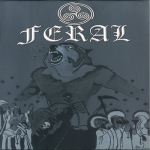 FERAL
For Those Who Live In Darkness
(self-financed)
63:17min

This is what I like about writing reviews. When I saw the title with the name FERAL on it, I just jumped on that review. Reason: simple. I thought it was the new record by FERAL from Sweden (the Death Metal act), however to my surprise it was a different FERAL, this band comes from New Brunswick, Canada. This (other) FERAL plays Black Metal but in no traditional fashion. Let me try to elaborate on what I could catch by listening to this band. First thing that I liked about this album “For Those Who Live In Darkness” is the song structures. They made me think of bands such as DESOLATE SHRINE or MAVETH but in a more controlled, less chaotic way with more tremolo and keyboards sections. The passages are good and make total sense in what this band is trying to represent with their music. Cold, freezing landscapes full of ice and nature in an apocalyptic representation of it. During the course of the record sometimes I feel like I’m also listening to ENTHRONED or SETHERIAL during their early chapters. The record is plagued with atmospheric passages with the raspy vocals (traditional) delivered on top of it. The length of the album might be a deal breaker for some people, for me it was the appropriate time to fulfill the idea behind the whole album. Production wise, there are some volume drops for some instruments, and there’s also a sound difference between track and track, like low-fi and mid-fi volumes and dynamics, while other songs sound stellar. Overall it’s not a bad thing, I just needed to adjust my volume from one track to another so I can listen to the deep layers of the song. So, in a nutshell this Canadian band looks promising, and while Black Metal is not my cup of tea (as stated before) I do like Black Metal bands and the ones that really capture the essence of the genre outshine. Let’s see what FERAL has to deliver in the future; we might be in front of the next Black Metal generation coming from America. Play it out yourself and grab a copy at https://feral2.bandcamp.com