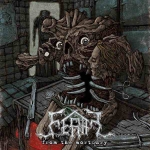 After two full-length albums and some split releases, Swedish horde FERAL return with an EP called "From The Mortuary". And the listener gets what he expects from the package. Finest HM-2 tuned old school Death Metal in vein of mighty ENTOMBED, hailing their days between "Clandestine" and "Wolverine Blues". Especially the last mentioned album seems to have a big impact on their current sound. The opener ‘The Hand Of The Devil’ and the second track ‘Reborn In The Morgue’ are really fine tunes with solid songwriting that bring back good old vibes of this era, where me but also most of our readers have purchased everything blind via the known mailorders what was offered from Sweden and described as OSDM. With ‘The Cult Of The Head’ the guys increase the speed and show, that they can do it quicker and harder instead of just rotting slowly through their midtempo tracks. With ‘Necrofilthiac’ the band presents a re-recorded version of a track they contributed to a soundtrack some years ago and without knowing the original version, this new version sounds very solid and kills. ‘Relentless’ is track number six and a well-done PENTAGRAM cover, so all in all a this is a very good EP, with proper songwriting, cool cover artwork and with six tracks definitely value for money. Surely the band delivers nothing new but who of us really wants that? More info can be found at the following locations: www.feral.se, www.facebook.com/pages/feral/102289189809609, www.facebook.com/cycloneempire