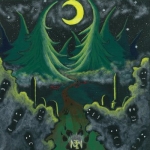 Canadian one man Black Metal piece FERAL released his second album in 2017 via Horror Pain Gore Death Productions. “Forever Resonating In Blood” is way more than just a Black Metal record. I am not sure if I ever crossed path with such a mix of nearly everything Metal music provides… and I can’t tell if that’s something good or the opposite. It’s definitely a very interesting piece to listen too. It’s aggressive and straight forward, it’s diverse and no record to put some label on what so ever. It starts with dreamy acoustic guitars which let you think you stumbled upon some atmospheric Black Metal piece. Those dreamy guitars appear pretty often on this record, but actually don’t seem to add on to anything. It’s just somehow filling the parts in-between the songs. They don’t seem to connect the dots of this album. Of course right after those passages the guitars sometimes turn into a Trash Metal influenced beast or some sort of Heavy Metal with loads of reverb. Still very melodic, but it doesn’t really fit together. And that’s what’s happening the whole time over and over. Everything in itself works out perfectly and I do like a lot here. But it seems like you need to puzzle your favorite parts together in between the stuff which doesn’t add to them. Which is weird because J.Feral is doubtlessly a great musician and obviously capable of using song structures. The sound is full and pressing, the mix is good as well and the vocals are what I like most. Very aggressive and pretty old school. “Forever Resonating In Blood” is a good record but sadly doesn’t really know where to go. Anyway I think something you should check and decide for yourself: www.facebook.com/ftwlidtjlctp, www.horrorpaingoredeath.com