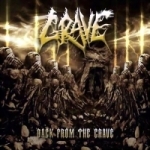 GRAVE
Back From The Grave
(Century Media Records)
95:01min

"Into The Grave" (1991), one of the masterpieces that’s obligatory when trying to understand this thing called Death Metal (ah!… good old years, for sure!). The band? No other than GRAVE. A Swedish cult act that then, in the following years released other good albums such as "You’ll Never See" (1992) or "Soulless" (1994). Three of the original members of the band: Ola Lindgren (guitar / vocals), Jensa Paulsson (drums) and Jonas Torndal (guitars on this record, although he used to play bass in the past) have met Fredrik Isaksson (bass), an ex-THERION member and have decided to compose 9 cuts of a pure, (very) old school type of dark Death Metal, not like the aforementioned jewels, but at least interesting to make you move your head with the new songs. The band sounds a bit more groovy now, but the general old feeling is present in the new compositions. You have those hyper dark and brutal rhythms mixed with little more variation than in the past and all of this together results in a very good record. The title fits perfectly with the new effort from the Swedes: "Back From The Grave", as it seems that the guys have re-discovered themselves and have tried to make something that sounds as old school GRAVE-style as possible… And I really think that they’ve succeeded in it! Now it’s up to each one of you to understand and accept it or not!!! Of course, there will always be people that think that "second parts never were better"… I’m not one of those! I advice you to be ready for the limited edition first pressing of this CD, as it will come in a double CD with the three demos from the band as an extra: "Sick Disgust Eternal" (’88), "Sexual Mutilation" (’89) and "Anatomia Corporis Humani" (’89).