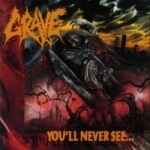 The album title was downsized a bit and printed in an old white font, instead of the big orange letters that got used on the original release. The logo is in white now (the original was orange as well) and moved from top left to top right. The entire artwork was enlarged to fit the full frontcover now, but its quality unfortunately suffered as it became way too dark now. The booklet was turned into a fold out version, features all the lyrics, but lacks the individual member live shots (the bandpic from the “And Here I Die” EP backside was used instead, while the EP cover – into a dark red now – can be found behind the CD in the crystal box). Bonus material: the 6 tracks off GRAVE’s “And Here I Die” EP.