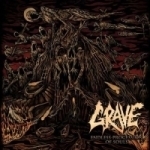 So how do we start to dig into this… GRAVE? As you should well know the band is legendary and they’ve laid down the foundations of Swedish Death Metal with their first two albums "Into The Grave" and "You’ll Never See". Those are genre classics and still stand the test of time. "Soulless" was a strong follower and then they went to shit with "Hating Life" after which they split only to come back in 2002 with solid "Back From The Grave". It seems like after that rotten comeback GRAVE (or Ola Lindgren who is actually the only remaining original member of the band) are content to give the fans what they expect without any deviations. Now it’s not a bad thing and I personally liked two other albums that followed – "Fiendish Regression" and "As Rapture Comes" – quite much. Unfortunately the last two records released under the flag of Regain Records – "Dominion VIII" and "Burial Ground" – seemed really forced and uninspired, after a few spins they went on to gather dust never to be played again. So I have built my hopes up approaching this new GRAVE opus "Endless Procession Of Souls" released back at their old ‘home’ of Century Media. Right from the short intro monolithic opener ‘Amongst Marble And The Dead’ kicks off the proceedings with all the elements you come to expect from GRAVE – heavy thundering deadly riffs, rotten Ola’s growls, blood rushing energy and heavy mid-tempo D-Beat influenced Death Metal we all came to appreciate. The slow choking middle section veers into ASPHYX territory, so it’s a good start. Unfortunately the following tracks didn’t grab me as fiercely right up until 8th song ‘Perimortem’ with infectious SLAYER influenced riffing and killer dynamics throughout. The closing track ‘Epos’ is another brilliant display of monstrous Swedish Death Metal featuring some of the best riffs and songwriting on the album. Also the special editon CD has 3 bonus tracks – ‘Killing Technology’ (VOIVOD), ‘Efilnikufesin’ (ANTHRAX) and ‘Mesmerized’ (CELTIC FROST) covers – and personally they’re the best ones on the album for me which also shows the shortcomings of original GRAVE material, i.e. too many dull generic material has made onto the album. Basically, after five in depth listening sessions there’s nothing that would make me want to play it again in full, except those aforementioned tracks and 3 covers. This time they’ve added more crunch to the guitar sound compared to "Burial Ground" and made it sound much clearer (or transparent), soundwise it really reminds me of new ASPHYX and HAIL OF BULLETS releases, although it was produced by the band at Soulless Studios. Basically, this is just another good GRAVE album and I’ll surely be banging my head at their live shows whenever they come my way, but it isn’t mind blowing and nowhere near their classic releases or even the first two ones after reforming. Worth getting if you’re a fan, definitely better than the last two and that’s the end of it. www.grave.se, www.facebook.com/GraveOfficial?ref=ts, www.centurymedia.com