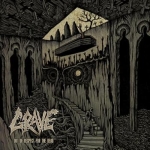 GRAVE
Out Of Respect For The Dead / Morbid Ascent
(Century Media Records)
74:34min

Studio album number eleven by Swedish GRAVE. With a history going back to 1988 or even earlier (the direct predecessor CORPSE was founded 1986) maybe not that huge amount. But honestly, I am glad the guys keep on releasing fabulous Death Metal instead of doing something else. The album "Hating Life" (1996) was some kind of crossroad, at that point I was not sure what the music on the next album may sound like. If there would be a next one after all. But the title of "Back From The Grave" said it all, from 2002 on the band delivered every two years their special blend of Death Metal. After my first listening session of the actual album I was a bit disappointed. Because the music was not spectacular, I was not electrified and no overpowering scent of having listened to one of the best Death Metal albums in 2015 filled my room. After a few days of listening I simply came to two conclusions. First and foremost the music of GRAVE after the year 2002 was never meant to be spectacular or intended to astonish the listener. It is just brutal Death Metal with a kick-ass Punk attitude, completely stripped of technical or dainty elements. Secondly GRAVE released constantly excellent Death Metal during the last 13 years, so you are simply used to it. The audience, or at least me, does not expect GRAVE delivering weak or mediocre songs / albums. Even the less strongly outputs "Dominion VIII" and "Burial Ground" are far better than the music many other bands are able to deliver. Somehow it is like a soccer referee. If he is doing a good or very good job no one notices him, but just one wrong decision and all eyes on him. Having these two aspects in mind I think "Out Of The Respect For The Dead" is the hell of a Death Metal album, great riffs, brutal vocals, superb artwork and a pretty nice sound. Standard for a band like GRAVE, but unreached by many other bands. The album is also released in a limited boxset containing not just three buttons, a fridge magnet (how could we have lived our lives without such essentials like fridge magnets?) but also and most important, the "Morbid Ascent" EP. You can find a review for this EP at this place. And since this EP was only available as 7" or digital download this boxset makes sense. www.grave.se, www.facebook.com/graveofficial, www.centurymedia.com