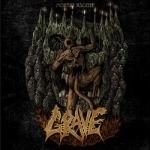 New music from GRAVE is seldom a bad thing, as I can’t think of a bad GRAVE release ("Hating Life"? – Frank), of course there have been some more interesting than others, though mainman Ola Lindgren knows how to craft a tune and deliver it with conviction and sheer power! "Morbid Ascent" is a part of Century Media’s 7" / digital download thing, which I find pretty cool, as it is nice to see the big labels on the vinyl wagon as well, doing special releases as this type. We are getting a couple of new tracks, a cover version of SATYRICON’s ‘Possessed’, ‘Epos’ from the latest album "Endless Procession Of Souls" (as a "Risen From The Tomb" remix) and a new recording of ‘Reality Of Life’ from GRAVE’s second demo "Sexual Mutilation" from ’89. Let’s start with the least interesting track on this release, the cover version of ‘Possessed’, the chaotic and cold feel SATYRICON has to their music, is lost here, as GRAVE is churning out the track as a classic GRAVE basher, perhaps the right way to handle the music, when doing cover versions, though I find that the song is missing its original charm and haunting atmosphere. My faves are the two new tracks, both are kicking it classic GRAVE style, the first ‘Venial Sin’ a fist in the face with its midpaced madness and grim vocals, pummeling and straight ahead, with some wicked guitar leads that spice up the tune. ‘Morbid Ascent’ kicks off a bit faster, though still classic and pummeling Death Metal from the GRAVE, before shifting into a dark atmospheric piece with haunting synth and chillfactor 10. This is a nice little release with GRAVE that is a sure pick up for fans of the band and Swedish Death Metal in general, a showcase of what the Swedes do best, Death Metal from beyond the grave, crawl six feet under for more: www.grave.se, www.facebook.com/graveofficial, www.centurymedia.com