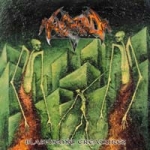 I must admid, that I totally missed out on Italy’s HORRID (shame on me!) and I am totally blown away by the re-release of their 1998 released EP "Blasphemic Creatures". The style is old school Swedish Death Metal in the vein of old ENTOMBED, DISMEMBER, CARNAGE or even early NECROPHOBIC. The first four songs are worshipping the good old days, when the Swedish scene had a creative output, that never was repeated again in that quality. Of course, the influences of HORRID are obvious, anyway they do not sound like a simple copy on this output. They simply continue at that point, where ENTOMBED or other protagonists stopped in the late 90s, while simply disbanding or changing their style. While listening to the material, I never would have thought, that this material comes from Italy as it sounds so Scandinavian. The quality of this stuff is so amazing, that if one of the more popular bands would have been mentioned on the CD cover as creator of this music, they easily could have sold 10.000 units or more with that material. The songwriting is amazing, sounding old school, yet fresh and uncosumed with brilliant riffing and fine melody lines and solos. Very professional drumming and the typical Death Metal grunts fulfill this low-tuned old school picture. The material of the first four songs has been recorded by Thomas Skogsberg in the legendary Sunlight Studio and this gave the material the fine-tuning it really deserved. Punishment 18 Records have added the two tracks of their 1996 7" EP "Awaiting For The Truth" as bonus. These two tracks show a more raw sound and style and of course the production is raw and harsh but shows already the basis for the direction, they continued on "Blasphemic Creatures". The EP closes with an unreleased track from 1995 called ‘Awaiting For The Truth’, another raw Death Metal piece, proofing, how brilliant their sound developed within only 3 years till the first release of "Blasphemic Creatures". If you still are into old school Scandinavian styled Death Metal, it is really worth, to check this re-release out. http://horrid.altervista.org, www.facebook.com/pages/horrid/106220033688, www.punishment18records.com 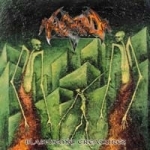 Italy’s HORRID have been around for quite some time already (since 1989 to be exact) and released three demos and a 7" ever since. But as I didn’t know the band before, I neither managed nor cared to hear any of those mentioned items. I guess you should know that I even had some (unjustified…) prejudices when I received this little advance cassette. The fact that Italy hadn’t produced too many brutal bands of good quality in the past and HORRID’s kinda stupid looking bandlogo were already two aspects for me not to expect too much from this 4 song offering. But you know what?! I WAS TOTALLY FUCKIN’ WRONG!!! HORRID come up with some really brutal, straight ahead sounding Death Metal in the vein of the old Swedish masters ENTOMBED, CARNAGE, GRAVE, DISMEMBER and the likes. They even went to Sweden to record this MCD at Sunlight Studio with Tomas Skogsberg producing and the result is a total killer!! You won’t find any trendy influences in their songwriting at all – just pure fuckin’ Death Metal the way we love it and the way it was originally played! Can’t praise this enough, but instead of wasting too much of your time, you better order yourself a copy straight away. It sells for $15 (ppd.) from the following address. Oh, and before I forget – drummer Matt also plays in another really cool band called NECROFLESH. They have a new 3 song promo available that’s highly recommendable as well and that everyone should ask for who loves brutal US style Death Metal. Contact: Rendina Matteo, Via Dei Tigli 16, 20020 Busto Garolfo (MI) Italy, e-mail: simrend@libero.it, website: members.xoom.it/horrid