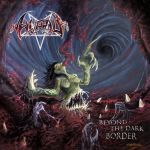 You must have heard about HORRID at least one time if you’re familiar with the Italian Death Metal scene, and you should have to know how much they worship the traditional Swedish Death Metal, so faithful that they regularly record with Tomas Skogsberg at his Sunlight Studio in Stockholm (if you don’t know who he is and how important his job has been, you’re simply on the wrong website!). They are one of the oldest bands of my country, they started in 1989 and shared the "demo years" with acts like CATACOMB, GORY BLISTER, SADIST, SINOATH, ELECTROCUTION, MIND SNARE, ANGEL DEATH and EXCIDIUM. "Beyond The Dark Border" is their fifth full-length, the second one with the German label Dunkelheit Produktionen, but the first one with the current line-up, with only the founder Belfagor at his position yet, while the old bassist Max and the drummer Riccardo left three years ago after the release of the previous album "Sacrilegious Fornication" (the first one started DAEMONIAC right after, the second one still plays in BOWEL STEW). I have given a chance to every album of this band in the past, for example when I discovered them, "Rising From The Hidden Spheres" was just released, but it didn’t capture my attention, its songwriting wasn’t strong enough so it sounded as a fruitless imitation of "Like An Everflowing Stream", "Dark Recollections" or "Bloodchilling Tales". Same story for the more recent albums "The Final Massacre" or "Sacrilegious Fornication", even if they’re always coherent with the "Swedeath" formula, they’re far from being perfect or just very good. But this new album is surely a step forward, there are good songs like ‘Cursed Dunes’ or ‘Demonic Challenge’ that make "Beyond The Dark Border" an enjoyable listening, without innovations of course, but it’s clear that Belfagor, with the new drummer Eligor and vocalist / bassist Dagon, produced something authentic and well-finished, and above all blind to modern trends. I’m curious why they recorded ‘Sacrilegious Fornication’ again, they probably wanted to give it a new form with the new line-up. All in all the whole album is maybe too long, almost fifty minutes can be too much for a Death Metal album, lacking in atmospheric parts and without straight to the point songs under the three minutes. However, a band like HORRID don’t give a fuck of any criticism, partial in this case; they do what they want, and "Beyond The Dark Border" is a good album of old school Death Metal tributing the Scandinavian masters, no more, no less. More information at: www.facebook.com/pages/horrid/106220033688, www.dunkelheit-produktionen.de