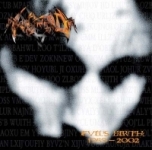 It shouldn’t be a secret anymore that I totally worship these Italian Death Metal maniacs and it’s really a pity that they still have to struggle so much to gain bigger recognition. I mean, a musically quite similar (project) band like Sweden’s BLOODBATH gets praised by almost every magazine / fanzine there is, mainly due to the fact that their line-up consists of rather wellknown names out of the Swedish underground… And the massive promo power and good distribution network of Century Media furthermore makes sure that everybody’s aware of that. I’m certainly not here to slag the musical qualities of BLOODBATH (they are actually a really cool act to me!) nor Century Media, but as so often it’s simply not fair that a band which has been around a lot longer and constantly delivers killer material is yet pretty much unknown to most of all those people who buy the Century Media stuff. So, in case you still haven’t checked HORRID out yet, I obviously will have to repeat myself once again: HORRID is first class, pure fuckin’ old school Swe-Death Metal in the vein of the early 90s with big similarities to old DISMEMBER or ENTOMBED! Even if you already own their great Deadsun Records debut "Reborn In Sin" (in that case: all hail to thee!) this album here’s a good opportunity to dive a bit deeper into the band’s past activities. As the title already reveals, it covers material from the early days of the band, namely their excellent 1998 MCD "Blasphemic Creatures" (for a detailed review on that just scroll up a little), the entire "You Are Mine" demotape from 1994, three previously unreleased live recordings from 1996 and the original version of ‘Winds Of Procreation’, which previously appeared on their "Awaiting For The Truth" 7" EP. I’m not exactly sure what lead to the album’s title, as neither 1989 nor 2002 material is featured, but what the heck… the packaging is great, the booklet comes with tons of pictures and the music’s killer anyway (even though you can easily recognize a steady development from their old stuff to the current recordings)! For all further band info you can either check out the HORRID interview on our website or go to: http://members.xoom.virgilio.it/horrid. Ordering info for this release you will most certainly get here: www.morehate.newmail.ru