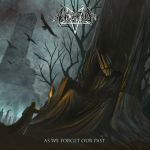 HORRID
As We Forget Our Past
(Dunkelheit Produktionen)
52:25min

HORRID is one of the longest running Metal bands in Italy. And “As We Forget Our Past” is their sixth full length release. And a really fine one, I might add. The interesting fact here is that this album has new versions of songs off their previous albums. And they were all re-recorded by the actual line-up that has been stable since 2015. So, they not only show an amazing display of musicianship, but also how the old songs have lived up to the HORRID legacy. Right after listening to “As We Forget Our Past” various times, I checked the original albums and thus, the original versions, which were already good. But the re-recording has helped turning them up in various aspects. Now, I came to the fact that HORRID is Italian by an info search. Shame on me. Because upon first hearing, I thought they were a Swedish band. The production is amazingly close to any of the classic NWOSDM bands, but with a modern twist. Everything here regarding their sound is top notch. The guitar sound is huge and has all the HM-2 glorious-ness with the bass following right along. The drums are surely using some sampling, but still they manage to fit perfectly withing the mix. And all of these elements combine into a well rounded and professional overall sound. Congrats to the recording, mixing and mastering engineers. The guys knew exactly what HORRID were going for. Mario, guitarist and founding member, churns out solid riffs one after the other. He knows his craft and his guitar playing shows that. Tasty leads jump out from time to time to spice up the listening experience even more. Simone’s drums are a perfect match for Mario’s riffs. He has a bunch of interesting yet familiar fills and really good timing on his double kicks. And the glue between drums and guitar is provided by Davide’s pounding bass tone and execution which is amazingly tight. His vocals are great, using a deep grunt and adding some higher pitched backing vocals to accentuate parts. This album spans HORRID’s entire career and I think the song selection is perfect. I mean, they all sound cohesive and the listener is never distracted by an odd song or something out of their style. And the choice of releasing this album is something that effectively helps them in their expanding career. The band is not bringging anything new to the table, but by all standards, “As We Forget Our Past” tops as a fine and relentless Death Metal album. Totally recommended to Death Metal fans and NWOSDM worshippers alike. Contact the band through their official page www.facebook.com/horrid1989 and get their album from their label: www.dunkelheit-produktionen.de