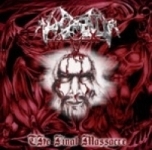 Finally a new sign of life from Italy’s grandmasters of (Swedish style) old school Death Metal. It’s been quite a while since the last effort of this Varese / Milano based outfit, the 2006 killer release "Rising From The Hidden Spheres", saw its light of day. The squad always gave (and still give) a fuck what current trend was going on and peristently followed their own left hand path. That’s the way it should be. The band, which consists now only of founding members Max and Belfagor, didn’t release something new during the last five years except some tape re-releases of an old promo and other compiled tracks from their previous recordings. "The Final Massacre" is also not completely filled with new HORRID material. The disc features the four tunes of their long sold out first mini album "Blasphemous Creatures" which is in my opionion an absolute classic and one of the best Metal of Death releases ever emerged from the Italian underground. But that’s not all as two more old tracks can be found on the tracklist of the album as well: ‘Winds Of Procreation’ and ‘Kissing The Rotten Cross’ find their well deserved glory again and it’s superfluous to mention that the original 7" EP from 1996 is a well sought after collectors item nowadays. But finally there are four brand new assaults on this ten tracker. What shall I tell you? The band still reigns supreme and unleashes total crushing old school Death Metal of highest quality. These Italian maniacs haven’t lost their energy and passion from their earlier days and deliver abolute killer stuff which can turn out to become classics for every deathbanger. You can feel that this horde lives and feels the music and no trendy band could create such an feeling and atmosphere. Total dedicated to the sound we all worship and enjoy. But before I totally go insane I would like to advice you to get immediately hold of a copy of "The Final Massacre". Hopefully this will not be ‘The Final Massacre’ and there will be still more to come from Italy’s finest warriors of total old Sweadeath insanity. www.myspace.com/horridofficialspace and btod@fastwebnet.it (label).