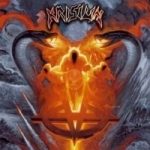 The blastmaster gods from Brazil are back! Personally I consider KRISIUN definitely as the most skilled and outstanding musicians in the entire Death Metal scene next to MORBID ANGEL and “Ageless Venomous” is again a proof for this thesis. But without beating the bush I can announce that KRISIUN’s fourth album can’t compete with the predecessor “Conquerors Of Armageddon” when it comes to intensity, speed and brutality. Well, honestly spoken it’s almost an impossible venture to top this masterpiece and I guess KRISIUN simply tried to avoid to come up with “Conquerors…” part 2! “Ageless Venomous” is a bit more focussed on the musical abilities of KRISIUN, so here you get also two additional instrumentals. Of course also this album comes up with a couple of brilliant ultra speed kill tracks featuring the fastest drumming on earth by inhuman Max Kolesne. Just take a listen into the war machines “Eyes Of Eternal Scourge”, “Ravenous Horde”, “Sepulchral Oath” or the cool title track and learn the meaning of Death Metal supremacy. Personally I think the main reason why “Ageless Venomous” lacks in brutality compared to “Conquerors Of Armageddon” is definitely the rough production. This time the album was recorded at Creative Sound Studios in Sao Paulo, Brazil with the help of Tchelo Martins (e.g. ABHORRENCE). The production is of course still okay, but it can’t compete with the powerful sound of Eric Rutan and Andy Classen (Stage One Studios). Last but not least “Ageless Venomous” comes up again with a cool artwork by Joe Petagno, but again I prefer his work for “Conquerors Of Armageddon”. To sum it up, although my moaning sounds pretty negative, KRISIUN managed again to come up with one of the greatest Death Metal masterpiece of all time!