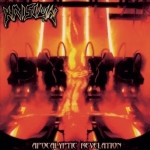 KRISIUN have been the torchbearers of the Brazilian Death Metal movement since SEPULTURA decided to lose their edge and change their style to more of a boring tribal beat. Throughout the years these guys have kept the same formula of success and have toured like road dogs to prove it. Century Media has reissued remastered editions of the freshman (1995’s "Black Force Domain") and sophomore (1998’s "Apocalyptic Revelation") full length efforts of this extreme brother trio and have included 3 live tracks on "Apocalyptic Revelation". I’m not a huge fan of reissues since most are usually just a cash grab and should only be done when either: 1. the album has been out of print for so long that it is insanely overpriced when a copy is found or 2. the record label is including enough bonus material that it makes it worth the investment. The music speaks for itself… fast, brutal, war inspiring. All three musicians are very proficient and know how to play their instruments. The band plays very tight both on the record and live. Stand out tracks were: ‘Kings Of Killing’, ‘March Of Black Hordes’, ‘Rises From Black’. The cover tracks of SLAYER and MORBID ANGEL were spot on, and the live tracks were sick. Fans of ANGELCORPSE, IMPIETY, and REVENGE should check out KRISUIN if you haven’t already. If this CD isn’t in your collection already, I would suggest you pick it up. If you do have the CD, I think you are safe with leaving the reissue on the shelves. For more info: www.krisiun.com.br, www.facebook.com/pages/krisiun/127910603216, www.centurymedia.com