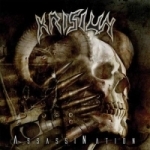 Mathematically correct Death Metal! Now, is that something we desire? After Rebaelliun’s “Annihilation”, Behemoth’s “Demigod” and Hate’s “Anaclasis – A Haunting Gospel Of Malice & Hatred” it’s not that I desperately need another perfectly played Death Metal extremity. By all means, Krisun’s “Assassination” is not only sheer brutality or drumming at light’s speed, but I don’t think the lacking aspect is in the music itself. The riffs are mostly great, and looking at them in a clinical way I even say they are melodic and entertaining. The drummer does a job any long distance runner would approve with a respectful nod. No, the music has the necessary ingredients to consider this Brazilian trio’s album a fine Death Metal creation. I’m not even sure they cheat in the studio, because when they played live in Oslo half a year ago, I was deeply impressed by their skills. The main problem of “Assassination” is that it feels too perfect. The feeling that they know how to handle their instruments more than they know how to make it sound deadly, runs through my veins every second of this album. To put it this way, “Assassination” doesn’t reek of putrefaction the same way classics like “Blessed Are The Sick”, “Leprosy” or “Clandestine” did and still do. There’s no feeling of death! It’s just sheer brutality, as well as technicality (this is unfortunately the case with the majority of modern Death Metal albums! – Frank). So, certainly I am impressed but that’s not enough when I’m going think about which album I’ll play next. And, since I didn’t know Motörhead’s original version of ‘Sweet Revenge’, I mistook it for Krisun’s best track on the album. The midpaced song feels better compared to the rapidness of most of “Assassination”‘s blastbeats. I think I play SEance’s “Fornever Laid To Rest” once again, just to get that good ol’ Death Metal feeling. “Assassination” is, despite its obvious qualities, too modern, too clinical and it lacks the necessary it! www.krisiun.com.br, www.centurymedia.com.