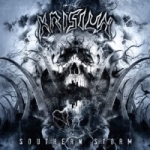 Never change a winning team!!! In the case of KRISIUN producer Andy Classen (Stage One Studios) is probably the best combination and “Southern Storm” bascially does the same hellraising Death march like the brilliant forerunner “Assassination”. Qualitywise the material is pretty much equal and in terms of variation KRISIUN have grown so much in terms of elements in songwriting compared to their beginnings. To me KRISIUN are totally gods in terms of tightness and power and there’s even more again a great SLAYER like feeling in this creation. It’s a pity that KRISIUN are still treated as a sort of overtoured and uncrowned killing machine nowadays, cause in terms of quality this band basically deserves the same success as KATAKLYSM, DYING FETUS and all those third Death Metal generation bands that are doing good nowadays. To come to the point “Southern Storm” is a good continuation of the “Assassination” style but not an increasing progression, but what the hell could do such a band better without betraying their musical roots!?! Good work, although I see no need for KRISIUN covering SEPULTURA’s ‘Refuse / Resist’, cause both are the most outstanding and accepted Metal exporters from Brazil, so there’s no shadow for KRISIUN left to stand in!!! www.myspace.com/krisiun666