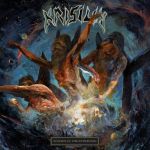 The three brothers from Brazil are back! After three long years, KRISIUN present us their eleventh and newest album “Scourge Of The Enthroned”. In their now nearly thirty years long career, the trio evolved from the full force killing machine in their early days to a technical Death Metal act with class. The special ingredients in the sound of KRISIUN were the always present influences of extreme old school Thrash and early Black Metal that made them sound unique. All of this hasn’t changed on “Scourge Of The Enthroned”. The album is a furious rage of Death Metal with technical finesse and a whole bunch of blackened Thrash moments. Some pretty rare moments even remind a little bit of more extreme acts like ABORTED, but that is not a little bit of a problem with me. My problem with the album is the mix that often puts too much stress on the drums, especially when the drumming of Max gets really fast and sometimes frantic. In those moments, a lot of the vigour and energy of the songs get lost. Otherwise fine songs like ‘Devouring Faith’ for example lose a good part of their quality. Nevertheless “Scourge Of The Enthroned” still is an album above average, thanks to songs like ‘Demonic III’, the variable ‘A Thousand Graves’ or the final ‘Whirlwind Of Immortality’. And after listening five to six times I got used to the problem of the sound a little bit. So in the end, anyone into KRISIUN should not be disappointed with “Scourge Of The Enthroned”. Visit www.facebook.com/krisiun.official for the band or www.centurymedia.com for the label.