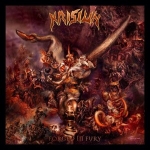 Brazilian Death Metal figurehead KRISIUN return with their tenth album to celebrate their 25th anniversary, four years after their last fine output. The three brothers are a really reliable force in the Death Metal scene, as they always deliver quality above average. With their former output “The Great Execution” they released a really strong predecessor, so I was curious to hear, if they can manage to repeat this quality on their new output “Forged In Fury”. Their unique version of Death Metal is still raw and uncompromising. The opener ‘Scars Of The Hatred’ clearly shows the direction of the album. Once again raw and brutal and technical Death Metal without compromises. Compared to the earlier days of the band, KRISIUN now cares a lot more about groove and flow in their sound without losing any power or brutality. Even after all these years, their Death Metal still sounds fresh and powerful. Fast drumming and blastbeat attacks mixed with precise and brutal riffs of Moyses Kolesne and the dark vocals of Alex Camargo still deliver the foundation for their brutal sound. But instead of simply blasting themselves through the one hour running time of the album, the band slows down the tempo here and there, so the songs sound varying. Also I still love, how they paint their Thrash Metal influences black. Their guitars still sound really dark and evil and spread around a similar rawness, MORBID ANGEL used to have on their early outputs. Even though they reduce the speed here and there like in ‘Ways Of Barbarism’, the material is still brutal and menacing. The last track ‘Milonga De La Muerte’ surprises the listener with a menacing acoustic part. Sure, the band has not made any significant changes or experiments in their sound but it is good to have those bands, where you can rely on the sound of each new output. Fans of the band and fans of brutal Death Metal in the old school way can purchase the album without pre-listening. Well done. More info can be found at the following locations: www.krisiun.com.br, www.facebook.com/pages/krisiun/127910603216, www.centurymedia.com