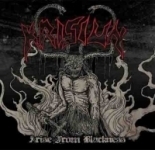 Almost twenty years ago, Brazil’s KRISIUN released their legendary EP, “Unmerciful Order”. Now, along with the split EP released a year earlier with VIOLENT HATE, KRISIUN’s early work is recollected in a single volume, fittingly titled “Arise From Blackness”. “Arise From The Past” is more like it, though. After listening to this brutal old stuff, one thing becomes clear: KRISIUN has, remarkably, not changed overmuch. Sure, their studio albums can sometimes undercut their potential ("Ageless Venomous" has one of the worst drum mixes I’ve ever heard) but the songs themselves, the things that identify KRISIUN, are and have always been, there. On ‘Crosses Toward Hell’ Alex Carmago’s mighty and cruel vocals bark and roar demonically, and the blasting and guitar tapping combine to make a chaotic atmosphere, like a picture of the world about to rip at the seams from the violence it cannot contain. Needless to say, blast beats abound on each song. It wouldn’t be very KRISIUN without blast beats! The best song on “Unmerciful Order” is, by far, ‘Summons Of Irreligious’. Everything about it reeks of blasphemy and deep seated resentment for Christ and his flaccid creed. But in my view the guitar work is what really lends this song its demonic edge. Something about the sound and the tapping catapults the atmosphere into a black place. The same effect is achieved on ‘Infected Core’, via the tremolo. On "Curse Of The Evil One”, the 1993 split EP with VIOLENT HATE, the sound is broader, thicker, but no less intense. If anything it’s even more insane than “Unmerciful Order”. ‘Sinner’s Scorn’, for instance, sounds great, well produced. Everything is clean enough so you can hear the instrumentation, but dirty enough so you can headbang to it. There’s an eeriness to this EP, more than what’s featured on "Unmerciful Order". It’s hard to explain but the atmosphere is something like old MYSTIFIER; something old, demonic, and half-remembered by time. At any rate, it’s a masterful capturing of wickedness in Metal music. For those of you who aren’t acquainted with KRISIUN this is a great place to start. Worth it! www.facebook.com/pages/krisiun/127910603216, www.krisiun.com.br, www.centurymedia.com