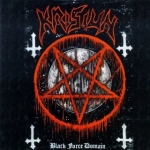 Even though KRISIUN, one of Brazil’s premier Death Metal bands, is around for more than two decades now, I never really checked out much of their stuff. So now I have the chance to catch up to their works from the very beginning, since their 1995 debut "Black Force Domain" recently got reissued by their long time label Century Media, even for the first time on vinyl! Originally released through Dynamo Brazilie, the album shows three young and absolutely impetuous brothers on the height of their vehemence. Death Metal at neck breaking speed, rabid riffing and furious solos – no frills, no swerves, no experiments. And nothing else! The pure power of the riff condemns you into eternal fire, the sheer energy takes your breath and the hateful growling vocals are the cream of the crop. Intense as hell and even excruciating to listen to, since there’s not a moment of release, except for the short instrumental ‘Infamous Glory’. But if you love the fuckin’ oldest school of brutal Death and are not a wimp, you’re welcome to get your ears bleeding right now! Let the ‘Black Force Domain’ and worship the ‘Messiah Of The Double Cross’! Fuck, this album is so ruthless, you can only love it or hate it! Even nearly twenty years after they were unleashed upon mankind, songs like ‘Evil Mastermind’, ‘Meanest Evil’ or ‘Sacrifice Of The Unborn’ blow you away. Imagine "Black Force Domain" to be released today, it would also be a fuckin’ killer! So, if you missed it by now, here’s your second chance! As bonus tracks, we find two songs KRISIUN contributed to tribute samplers around the year 2000. First we have an unspectacular version of SODOM’s ‘Nuclear Winter’, originally included on the compilation "Homage To The Gods", that was included in the initial edition of SODOM’s "Code Red". The other cover tune is an even more superfluous version of ‘Total Death’ by KREATOR, taken from the "Tribute To Kreator" album. Both versions lack the atmosphere and energy of the originals, so I can only state that KRISIUN show some taste here and worship their unfluences. Yet, these tracks are nothing more than a mere bonus. Newbies like me should check: www.krisiun.com.br, www.facebook.com/pages/krisiun/127910603216, or their company: www.centurymedia.com