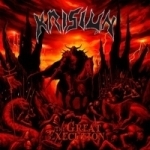 I’ve had a soft spot for the Brazilian brothers in arms in KRISIUN ever since I first laid ears on them when they released their third album "Conquerors Of Armageddon" in 2000. Their apocalyptic, blazingly fast and over the top relentless and brutal Death Metal spoke to me, and I haven’t looked back since. I soon picked up the first recordings of the band, where the first full length album "Black Force Domain" still stands as a classic and an album I can’t have enough of, together with "Conquerors…". Since then I actually think I’ve been reviewing all of their albums, they haven’t been all that consistent and forcefull all the way through, as the first releases. The last album they released "Southern Storm", returned some of the furious madness and energy the band now and then lacked from 2001 to 2008, they were back in an all out attack on my senses and ears, what a bliss. It’s been a bit quiet on the recording-front since that album, and it seems like a little break has been good for the band, as "The Great Execution" is an overload of energy, maniacal riffing, punishing drumming and aggressive vocal assaults. The first half of the album is more or less classic KRISIUN armageddon, relentless brutal Death Metal with the thrashing aggression in the riffing that the Brazilians are known for. Pure energy bursts of aggressive and fast Death Metal. Though then the palate changes a bit with track number 6 ‘The Sword Of Orion’. It is getting technical, quite technical, without losing the aggression and brutality of course, and the progression in the music is immense, we are getting neo classical guitar leads in the middle of it all, and Spanish guitars towards the end of the 8 minute basher. It is not that the technical level of the album isn’t kept high from the start, a track like the titletrack is also a tour de force of neckbreaking riffing, leads and breaks, though during and after ‘The Sword Of Orion’ it goes over the top, while still being kept good and brutal. The best of KRISIUN with a new and more over the top technical side added, together with progressive elements and exciting and working experiments. This might be an evolution of Death Metal as the band isn’t throwing any of the and their traditional elements overboard and keeps it more than brutal all the way through, even when the music turns beautiful, which happens once or twice during the record. The production is also fitting, clear though not tiring at all, quite organic and massive. This might become the best work of KRISIUN, damn a strong album, we have the classic deeds of the band spiced up with fresh elements and massive levels of energy and intensity. I had not in my wildest dream imagined that the band would return with an album as impressive as this, thumbs up. And the re-recording of ‘Black Force Domain’ – massive, I don’t have more to say about that than massive! More info at: www.krisiun.com.br, www.centurymedia.com