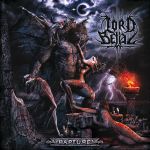 1992… that was the year this unholy band form Sweden formed. And 30 years later they released their ninth album with basically the same original members. And they haven’t changed their style a bit, but only refined it to the incredible form of Black Metal with Satanic Death Metal overtones and obvious classic Heavy Metal references. While they have been compared at times to bands like DISSECTION or NECROPHOBIC, truth is that they all share a common background of playing extreme Metal, but with the melodic edge of traditional Heavy Metal they draw inspiration from DIO, KING DIAMOND, JUDAS PRIEST, RAINBOW, MAIDEN… you get the picture. Of course BATHORY, SLAYER and CELTIC FROST have their aura here too and with that they have been creating music, in a very similar way. In this case, that’s a very good thing. Having many of their past albums in my collection, I can assure you that this is probably one of my faves from the band. The production is perfect, heavy, clear and powerful. The riffs are in a pure Heavy Metal fashion that have hooks that will rip your flesh and the drumming is on spot. For some reason the overall aura of the album reminds me of “Master Of Puppets” in a Black Metal version. The songs show variety and they sound killer playing fast or mid-tempo. And there are those riffs, those killer riffs like in my fave song ‘Lux Luciferi’ where they have a subtle use of piano that only adds more to their malefic Metal of Death. LORD BELIAL belongs to that rare race of bands that never release a bad album, but in this case, we probably are in front of their masterpiece. Contender for album of the year! www.facebook.com/lordbelialband, www.facebook.com/hammerheartrecords

Julián “On A Throne Of Souls” Núñez

Julián "On A Throne Of Souls" Núñez