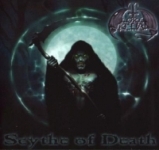 Musically this is a really good release. LORD BELIAL show how melodic Black Metal can sound without any keyboards. Creepy atmosphere on rather slow songs or even hymns. Cool dark artwork. There are four tracks on this CD limited to 1666 copies. 3 brand new tunes that remind me a little of DISSECTION. The slow, almost doomy title song lasts for seven minutes and also shouldn’t be shorter. ‘Black Void’ has a typical Black Metal blast beat but also gets slower in the middle part. ‘Possessed By Fire’ has a sort of Pagan or rather old school Black Metal feeling and you can easily shout along at concerts. The last track, musically a cool headbanger called ‘Purify Sweden’ is the tricky one: No Fashion Records didn’t want to release this one. Well, the bottom line in the lyrics is not to kick out or kill foreigners in a Nazi way but to start a crusade against non-Swedish religions like Christianity, Buddhism or Islam. So the overall tone seems to be against all sorts of religions and being a Black Metal band: why not? It even seems less one track minded than just to hate Christianity. Ha, I bet the band’s gonna hate me if I call them open-minded. What weakens my position is the sort of nationalistic (is that the right term?) tone and that the band especially seems to hate muslims. Apart from that, the chorus is problematic as the listener is told to kill. Of course this can all be cliché and I’m sure we had worse lyrics en masse but that doesn’t make those lines less stupid. First of all: they make sort of ‘politics’ more important than the music. Secondly: why can’t people just decide what they’re gonna believe in? Isn’t this what the trouble in the world is all about? Kill someone for his religious beliefs? If this is just a cliché, let me tell you I rather listen to ‘True’ Metal sword & sorcery clichés than to stupid shit like that. Decide for yourself whether you need this one or not. The music is good.