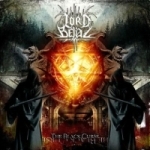 Black Metal is still a very young Metal genre but during the last five years for a lot of people it became quite obvious that only a handful of bands can still offer something new and unique to this style. Luckily the Metal world is not as black as it seems because there are still bands which from the start had released killer albums and kept this quality level with all their releases. LORD BELIAL is without doubt a band which needs to be called a Swedish Black Metal institution and overall are all 7 band releases worth a try. From the glorious old days of “Kiss The Goat” with the moon touched melancholy of the mid 90s to the furious Divide and Conquer times of their third release “Unholy Crusade” and the last releases via Regain Records in a more a less annual rhyme, the band has been a driving force in the Swedish scene. “The Black Curse” is a typical LORD BELIAL release but in some way it seems like an improved weapon of Metal mass destruction summarising all the evil, passion and musical knowledge we can expect from this four Swedish maniacs. The release is full of real highlights with so many side remarks to older times, for example ‘Trumpets of Doom’ is a very symphonic song but on the other hand for sure the most aggressive one since years, ‘Inexorable Retribution’ is a great Metal song with a fantastic solo and with ‘Ascension To Lilith ‘ we go back to the roots of this band. Only minus point is the disappointing cover (just think about the great cover of “Enter The Moonlight Gate”) which is reminding me of old Invasion Records times – but luckily is “The Black Curse ” musically the best LORD BELIAL album since ten years and a bad cover cannot change the overall impression of one of the real highlights of 2008. www.regainrecords.com, www.lordbelial.com