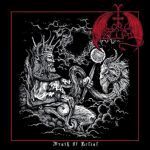 Ahhhhh… LORD BELIAL… Sweden’s answer to pure Black Metal since 1992. They were there near the beginning, defiling the filthy riffs in that captivating way that bands like SACRAMENTUM once did (and I wonder why?). There’s a beauty to it all. There’s the end of the Swedish Death Metal sound mixed with the beginnings of the early Black Metal sound that combine to equal pure fucking bliss. These were the glory days of this style that cannot be reproduced in the current genre, as much as bands may very well try. Maybe it’s the muddled production that smothers its torso around the songs, giving them the final layer of putrid coating. Regardless, “Wrath Of Belial” combines ’93’s “The Art Of Dying” and ’94’s “Into The Frozen Shadows” EPs. And it could not be more glorious. ‘Bleed On The Cross’, with its murky guitars and highly mixed drums introduced the world to a band that would last over two decades. The vocals are gurgly and raspy, which was sort of the common style back then, but effective immensely. ‘Hellspawn’ is the perfect name for this track as it sounds like its title. The ominous guitars and steady drumming of ‘Grace Of God’ create a rather sordid atmosphere. The energy during the early nineties must’ve been fucking encapsulating with bands’ hunger to create something new and be a part of the movement. A brief acoustic interlude of ‘The Art of Dying’ leads directly into the epic ‘Jesus Falls’ which buzzes and stings with its furious guitars. ‘Malevolently Reversed’ and ‘Maniac Madness’ end the first demo with as much angst as the opening tracks. ‘Lilith-Demonic Queen Of The Black Light’ has a slightly more polished production, but not by much, and that’s the beauty of it. Capturing this sound in their early days is a nice chaotic memory colliding with their later, more slick sound. ‘Into The Frozen Shadows’ is a blistering track with a little more fullness to it than on their first demo. Here’s a band that was growing and developing at a fairly quick pace, while still maintaining their original sound. The swaggering ‘Mad Redeemer’ seems to have a slight BURZUM influence in the vocals whether intentional or not. ‘Satan Divine’ is pure blasphemy, as the final track ‘Ancient Slumber’ has a DISSECTION vibe in its guitars. “Wrath Of Belial” is a perfect example of early Swedish Black Metal. If someone asks, hand them the physical copy of this. Or send them to me. This demo collection is so fucking good I immediately ordered it. For more information, check out www.facebook.com/lordbelialband, www.vicrecords.com