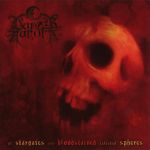 Since 1994, Germany’s LUNAR AURORA traipsed through the wilderness of Black Metal with solid footing until their split in 2012, which is a nice accomplishment of nine studio albums. Their take on solid Black Metal, with a little bit of keyboards through in for good measure, held firm in their legacy. The third full-length "Of Stargates And Bloodstained Celestial Spheres" captures the essence of the band reaching for its place in the pages of Black Metal lore. The opening intro ‘Kampfork’ meanders through a mystical backdrop leading into the blazing rhythms of ‘Schwarzer Engel’, a bombast of classic old school Black Metal we all yearn for. Majestic keyboards introduce the bleating ‘Die Quelle Im Wald’ with wailing vocals and steamrolling drums. ‘Blutbaum’ continues the consistent sound of the album with echoing vocals and mesmerizing guitars, swirling forward into the chaotic abyss of our souls (or something like that…). The instrumental ‘Moorleiche’ sets up the oncoming horde of ‘Drachenfeuer’, a track of no-nonsense warfare and symphonic atmosphere combined. A couple of tracks later, ‘Verwesung’ slows it down briefly with a mid-tempo offering to give us a slight break, and a mellower ‘Weltengänger’ acoustic piece with whispering voices, leading into a charging ‘Child Of The Apocalypse’, bringing the album into full-swing. The album continues with its pulsing rhythms and layered atmosphere of ‘Der Leidesweg’ before soon reaching its end. The album overstays its welcome slightly with 54 minutes. And though LUNAR AURORA had not yet reached its pinnacle as they did in the woods-infested "Hoagascht", they were well on their way to carving their way into the annals of Black Metal as we know it. For more information, check out www.lunaraurora.de, www.cold-dimensions.de